I fondly recall my college experience and refer to it as the “good old days”. And why not? It was mostly carefree with no mortgage and no kid’s tuition payments.  Retirement planning was a far-off concept akin to flying cars and other futuristic dreams. The 401k wasn’t even invented, yet. The part time bar-tending job assured me I’d have spending money for dates, late night pizzas, and beer for the Thursday night campus parties.  Hey, the drinking age was 18 back then!

Now due to Covid, date night with Abby is ordering take out of two salads, splitting an entrée and watching Netflix.  Even the beer has been replaced by water or tea in “dry January”. But the current 7% inflation rate is the same as it was in my senior year of college.

If you were born after 1985, or if you’re part of a generation that can’t imagine what it was like to go to high school without a cell phone-(gasp!) you’ve never experienced living in a meaningful inflationary environment. For example, it cost me 15 cents to mail a letter in college. Now the stamp costs 58 cents and doesn’t get to the destination any faster! At the same rate of inflation, what you just paid $10,000 for today, will cost you $14,250 ten years from now.  Scary for retirees on a fixed income.

I described inflation in my last blog as too much money chasing too few goods and services. Prices are rising because the economy’s capacity to produce goods and services is not keeping up with our spending. Less supply due to labor shortages and broken (or at least bruised) supply chains, accompanied by an increase in demand as our economy powerfully reawakens from the medically induced coma caused by the Covid shutdowns are triggering price increases. Pandemic induced supply chain disruptions, especially shortages in microchips used in manufacturing everything from cars to appliances, combined with strong demand from consumers flush with stimulus money from government programs, have created this perfect storm of higher inflation.

Before explaining what solutions we’re researching at New England Capital, let me start with a few differences between 1982 7% inflation and 2022 7% inflation.  Today the inflation rate is rising from an artificially low level. In 1982 inflation was declining from a high of 14.8% in 1980.  We now have had a very accommodating Federal Reserve that have kept interest rates low, some say they have been kept too low for too long.  In 1982, then Fed Chairman Paul Volcker, decided to crush inflation by rising rates and cutting the money supply dramatically.  Our current Fed Funds rate is .09% versus 19% with Chairman Volcker. The current unemployment rate is 3.9% (it was briefly as high as 14.7% in April 2020 at the height of the Covid lockdown).  In the early 1980’s the unemployment rate was stubbornly above 10%.

While inflation will probably persist through 2022, or maybe longer, there are factors which could lead us to believe that inflation may be peaking over the next 6-9 months.  The rate from October to December 2021 actually slowed!  Some price increases are simply not sustainable.  The price of used cars are up 37.3% from one year ago and the furniture is up 17.3% for the same time period.  Supply chain issues should start to correct themselves.  For example, one major manufacturer of computer chips, Taiwan Semiconductor, is on track to raise output of chips used in cars by 60% over last year!  At the same time demand should see some normalization by the end of 2022 as government stimulus money gets used and programs aren’t renewed.

We can’t forget Midterm elections taking place this year as well. Historically the party in power has lost congressional seats during the midterms.  With both Houses of Congress narrowly controlled by the Democrats now, the Republicans don’t need a Tsunami or even a very large wave to change the power dynamic in Washington.  This could lead to more gridlock and more difficulty passing major legislation.  So, after all the midterm noise is over, the market usually reacts relatively well when one party controls Congress and the other oversees the Whitehouse.

We have been watching inflationary developments very closely at New England Capital and have already taken steps in our portfolio designs to combat inflationary pressures.  We have added TIPS funds, (Treasury Inflation Protection Securities) and Commodity funds to most of advisor models. We are looking at other opportunities that have historically done well in rising interest rate environments. Companies and certain sectors of the economy which have strong cash flows and have the ability to raise prices are typically more stable during inflationary times. Company dividends will also play a key role in maintaining stable valuations. We have chosen shorter term bond Funds verses longer term bond funds and increased the quality of those bonds. We of course will continue to monitor the markets and the inflation situation to make any changes we feel necessary. As you see in the chart below, both stocks and bonds historically have done well even during inflationary times, if the rates are not extreme.

Stocks and bonds have done well in inflationary periods 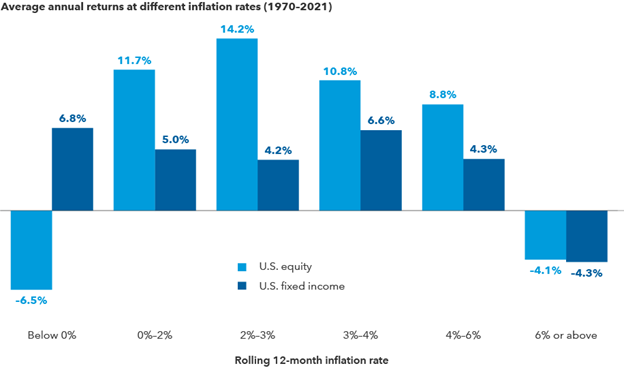 Based on this historic chart and other factors, I want to make sure we don’t overreact.  We will be watching the actions of the Federal Reserve very closely, including their messaging this week, the last week in January. They must carefully “thread the needle” with their interest rate policy.  They must raise rates enough to slow inflation but not raise them too much or too fast as to cause a recession.  It’s not time to abandon our long-term allocation strategy, but it is time to expect more realistic returns.  Diversification will be our friend this year.  The stock market, like a tree cannot grow too high or too fast and still be healthy.  We also can’t get too conservative since we will need to keep pace with even moderate inflation we could have over the next decade. To paraphrase the words of American Funds portfolio manager, Rob Lovelace, it’s time to buy the raincoat, but it’s not time to put it on yet.  In other words, we’ll be prepared!